Every year 3-6 talented Czech and Slovak students have a chance to visit the United States and spend one year studying at the University of Nebraska. Potential scholars should find all information they need about the scholarship here. Others can learn will learn what an amazing person Paul was.

Paul Robitschek was born in Prague on October 15, 1916, to Otto and Frieda (Bedriska) Robitschek. Their home was on Old Town Square at 21 Michaelska. Paul’s brother, Marcel, was born on May 14, 1915. Marcel now lives in Vancouver, B.C. and has two daughters. 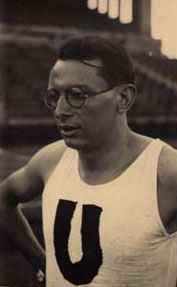 Paul Robitschek in 1938 at the age of 21 after winning 100m run at Strahov Stadion during Charles Uviversity versus Technika annual competition.

Otto Robitschek was a wholesale textile merchant. He had a reputation as an honest businessman, with a special skill for arbitrating disputes. He came to the United States for a few years early in his career and returned to Czechoslovakia, where he married Frieda. She was 15 years younger. She did
not work outside of their home. Otto died of cancer in 1932. Frieda died of pneumonia in 1938 or 39.

Paul attended elementary and secondary school in Prague. For a brief time, he studied medicine at Charles University. In 1938 at the age of 21 he won 100m run at Strahov Stadion during Charles Uviversity versus Technika annual competition (picture on the right). Year later however he came down with scarlet fever and had to withdraw from his studies.

On March 15, 1939, Hitler invaded Czechoslovakia and 15 days later, Paul got out of the hospital and took a train to London. In London, Paul enrolled in Northern Politechnic (now the University of London) and to study chemistry. He graduated two years later.

Paul’s first job was in research with De La Rou, a major British manufacturer of plastics. He worked in their laboratories for four years, from 1942-46. In 1946, Paul was hired by Leta Chemical Company, where he worked until 1949.

Moving to the U.S.A.

In 1949, Paul left England for the United States. He was hired by Hooker Chemical, in Niagara Falls (later acquired by Oxidental Petroleum). Hooker was then a major manufacturer of organic chemicals, and was interested in getting into plastics research.

At Hooker, Paul worked for Jesse Babcock, who told Paul, “If you make yourself useful, we’ll keep you. If you don’t, we’ll fire you.”

Paul convinced Hooker to get into plastics. Two years later, he was made a supervisor, with 5-6 people reporting to him. Two years later, he was promoted to manager, with 30 people reporting to him, 15 of which had PhDs in chemistry. Hooker then changed its name from Hooker Chemical to Hooker Chemical and Plastics. Paul was again promoted to Director of Research, and remembers “working like a dog” for 9 years. During his tenure, Hooker acquired 30-40 patents. Paul reported directly to J.H. Bruun, Director of Research.

In 1958, Paul left Hooker for Owens Corning Fiberglass in Granville, OH, where he worked as Manager of Plastics. While there, Owens secured several patents on fiberglass bonding.

In 1963, Paul went to Central Processing, which was owned by Vancouver Plywood, and manufactured adhesives for plywood. At that time, there were 7-8 companies on the West Coast that produced glue for the plywood industry. Central Processing was the smallest and least profitable of these companies.

Within the first 6 months with Central Processing, Paul fired all of the employees and one year later he convinced Vancouver Plywood to sell the unit to Skelly Oil (which later was taken
over by Getty Oil).

In 1965, Skelly formed Chembond. Paul was appointed President of the company and served in that position from 1965-1981. During his tenure, Chembond grew from 20 to 150 employees,
working on four shifts 24 hours a day. The company became very profitable, and in 1979, sales went to $40 million. Within the industry, the company also went from the bottom of the list to the top three in the country. Paul was the “darling” of the company.

Paul remembers Chembond well, as a “fair” company. The company philosophy was to always be truthful, open and fair. The company was always lean with highly motivated and loyal employees. If employees did not work hard, they did not stay. For those who worked hard, compensation was fair.
Paul remembers never being dishonest or telling a lie to his employees or to management. 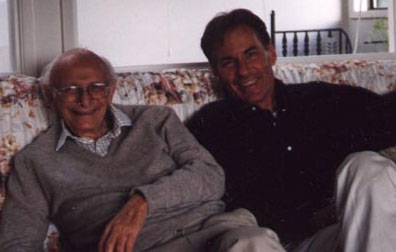 In 1981, Paul retired at age 65. He remembers with pride his career with Skelly. Paul greatly admired Donald Miller, then President of Skelly, as a man of extraordinary compassion. He believes that he was a “tough taskmaster” and believed that throughout his career, the companies that he worked for saw results…if you left him alone to do his job. Paul believes that you “reap what you sow.” He worked hard and demanded hard work from his employees. He also believed in always being honest and fair with all
those with whom he worked.

Paul’s wife, Alice Sandell, was born in London in 1917. They met during the war at a social occasion. At the time, she was working as a secretary at a fashion house. Alice was interred during the war in Italy. She was repatriated in 1944. Paul and Alice knew each other for five or six years before being married in 1951. Alice worked outside of their home only for the first year of their marriage. During her life, she spent her time making a home for the Robitscheks and working at her interests in weaving, drawing and flower arranging. They had no children.

In 1979, Paul had surgery for a cancer in his leg, the same year they built his current home in Eugene. After his retirement in 1981, the Robitscheks traveled in England and Yugoslavia, but did not return to the Czech Republic until after 1989. Since then, he returned four times. Alice died of cancer in October of 1990.

In 1996, Paul established the Robitschek Czech Scholar Program with the University of Nebraska. Because of his commitment to democracy and free market economics, Paul established the program to give talented Czech students the opportunity to spend a year in the United States to have a broad experience living in our culture. The goal, simply, is to give students who might not otherwise have the means an opportunity to fully experience American student life. Paul passed away in 2000.